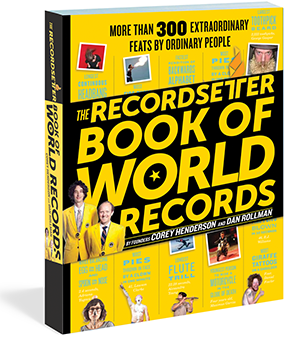 Capturing all the exuberance,

energy, and extraordinary human achievements found at RecordSetter, the new home of world records, this official RecordSetter world record book celebrates over 300 of the longest, loudest, slowest, weirdest, coolest, and most difficult-to-break records ever set. Best of all, if you get inspired, you’ll get tips and wisdom on how to set a world record of your own. The book was released by Workman on November 10th, 2011.

We've been snapping shots of the awesome people we've met on tour.

Were you there? Be sure to tag yourself! Sneak Peek Inside the Book 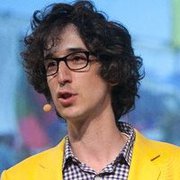 Dan Rollman is the co-founder and CEO of RecordSetter. A world record fanatic since the age of 10, Dan is proud to have set 11 RecordSetter world records. He's less proud, however, that 10 of them have been beaten. A former advertising creative with two Super Bowl commercials to his credit, Dan lives in Los Angeles. Corey is CTO and cofounder of RecordSetter.com. He is an entrepreneur who’s been working in web development since 1997, and proudly holds the world record for Longest Time to Watch "Amazing Horse" While Working. Corey lives with his family in Downtown Las Vegas.

Most Popular Records from the Book

We asked the community to vote on 25 records from book to decide which are the best, the coolest, and most awesome. The results are in. Congrats to the featured RecordSetters!


Most Straws Fit in Mouth

Set by Dave Thompson and Matt Kelly of Brisbane, Queensland

Most Air Guitar Windmills In One Minute

Most Eggs Crushed With Head In 30 Seconds

Add the Book on Goodreads

Please direct all media inquiries to